Sorry for the short break, but I'm back, it's Friday and I finally have time for a  tasting session. 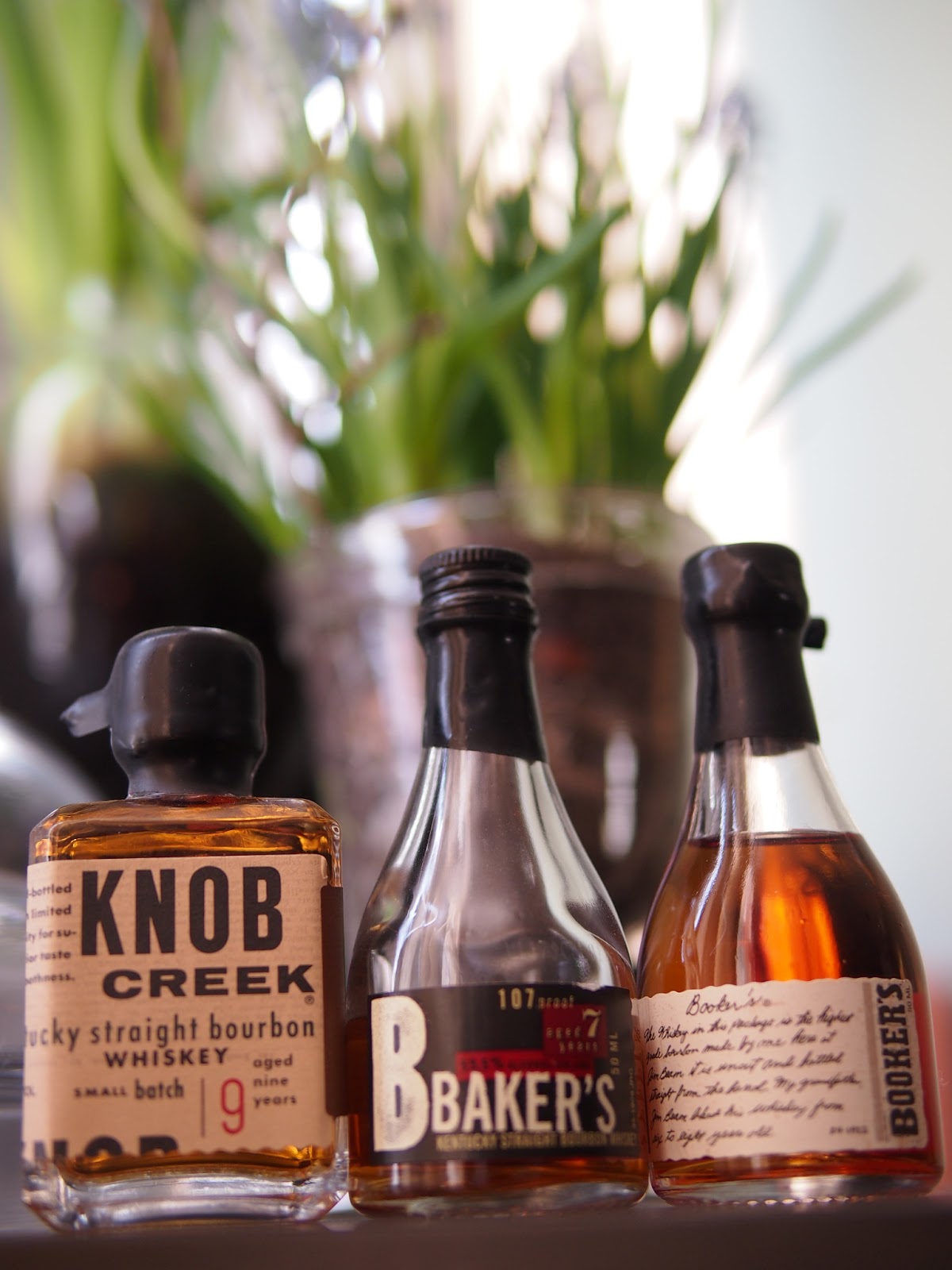 Having started tasting the "Small Batch Collection" with the comparison of Basil Hayden's to its younger, OGD brethren, it is only natural to finish out the Small Batch Series. Unlike "single barrel," "small batch" is a term in the whiskey industry with no mutually agreed-upon definition. Operationally, it tends to mean a product produced in significantly smaller batches than the base level product (in this case "Jim Beam"). Also presumed (sometimes incorrectly) is the idea that these smaller batches allow the distiller to target a more specific profile through barrel selection favoring characteristics that might be otherwise obscured if they just mixed them all together.

The term and marketing idea itself was created by Booker Noe, then the master distiller at Jim Beam in 1987, and began with his namesake Booker's, a barrel-strength and unfiltered bourbon aged around 7 years. This was in the early days of premium bourbon offerings and was likely in response to offerings like Blanton's, the first single barrel bourbon, itself released in 1984. Since the release of Booker's, the Small Batch series has expanded and now includes:
As noted in the Basil Hayden's post, that bourbon uses the OGD mashbill of 27% rye, while Booker's, Baker's and Knob Creek all share a traditional high-corn mashbill with 15% rye (the same as Jim Beam). The latter 3 will be the subject of this review and will serve, I hope, to illustrate how important barrel selection and aging can be in imparting a flavor profile to bourbon. As I've said before, mashbill is important but I think we can get too hung up this one variable. These will be tasted in order of proof so as to avoid burning out my palate unfairly.

Nose: Oak, vanilla, earth and citrus first, then noticeable cinnamon candy. No trace of acetone or other volatile aromas. Intense overall and here the earthy yeasty quality is well matched by the other aromas.

Palate: Medium bodied with noticeable alcohol on the attack despite the 9 years. The palate brings more earth, lots of oaky/vanilla flavors, cinnamon, cloves and small amounts of orange. A bit hotter than would be preferred for a 9 year 100 proofer.

Finish: The initial finish continues the palate quite pleasantly and is rather warming, but then trails off quickly, leaving a faint and less than ideal bitterness.

On Ice: Interestingly, this is one of they few bourbons that I have had that can not only stand up to ice but improves on the rocks. Perhaps this should not be surprising as I'm sure most of the KC made is drunk in this fashion. I find that ice fixes the hot palate immediately, and brings much more prominent vanilla and clove notes to the fore. Apparent sweetness also increases. The only part that suffers is the nose, which becomes predictably more muted.

Palate: Thinner than the Knob, but apparently less hot despite the increased alcohol. The palate here is much more balanced with caramel, toasted bread, and popcorn along with caramel, honey and vanilla. Very well balanced.

Finish: The finish is more focused on vanilla, has less of the bitterness I found in the Knob and fades gradually and more cleanly, leaving a note of apples.


Overall I like this one, and find it far more refined and pleasant to drink neat than the KC. It is on the generic side, but it is clear that this batch was selected from barrels than show an impressive degree of balance, versus the more raw intensity of the Knob Creek. This, as has been said elsewhere, seems a good crossover for brandy drinkers and I am now sad I missed the PA closeout sale of this ($25). For the full list price, though, it is a bit generic: it has no real flaws, but has little of special interest. I like the departure from the Beam house style into something more elegant, though.

Nose: Much more intense; round. Lots of earth, lots of vanilla. Seriously lots of vanilla. Otherwise more similar to the Knob than the Baker's, but I can't overstress how powerful the vanilla is here.

Palate: Good Christ. This is anesthetic at full proof, and while vanilla, oak and toast flavors arrive, they are fleeting and lost in the alcohol.

So, this is not really pleasant at full proof, as I think tends to be the case with most barrel strength American whiskies that reach into the 120s. Some bottles of Stagg are an exception; this is not. However, while I rarely enjoy a mouthful of alcohol like this, I do favor high proof bottles for the reason that you can taste them undiluted, and then make your own decision about how much water to add. And so:

The nose remains very pleasant, with the vanilla toned down a bit and a bit more nuttiness coming forward along with some honey and citrus. Smells more like dessert than a bottle of vanilla extract and is really rather nice. The palate is really much improved as well and is very different from the Baker's despite similar age and proof. This is much more forward, still hotter, but sweeter and more focused on desert-like flavors than spices or oak. The finish too is more manageable and fades into apples, vanilla and a cooling sensation that I usually associate with good distillation.

Tasting these together, as I had hoped, has been an interesting exercise in the effect of barrel selection and (maybe) aging on flavor, considering they all enter barrels as basically identical spirits. The Knob Creek seems like it was designed to be iced, and in this capacity I will likely see it again this summer; even with the extra 2 years in oak factored in, this seems a very different bourbon from the other two.

The Booker's and Baker's comparison at 107 I think is the most illustrative: they are totally different. Baker's has a much more refined and balanced profile, though maybe to the point of boring, while the Booker's is much more aggressive if rough.

Overall these are all well-made and pleasant bourbons, but other than waiting for a sale to buy some Knob to drink in the rocks on my roof deck this summer, I probably won't buy these again. I like the other 2, but I just don't think they represent a good value at the prices for which I usually see them listed. The Booker's and Baker's are about equal to each other in price per proof, but the former is too rough and too much a vanilla bomb, while the latter lacks interest. There is just too much good competition for these to move me to spend $40-50. At a 15-20% discount, however, I might be swayed.

Posted by Ryan Connolly at 3:39 PM