Heaven Hill and the Variables of Bourbon 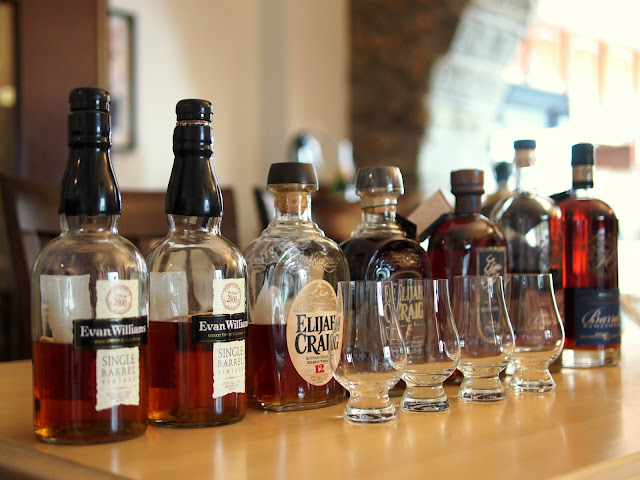 I have been thinking for a while about the different influences that lead to the profiles of our favorite bourbons. Almost everyone goes on about mashbill (the complement of grains), but while this is very important to the final flavor, there are a number of other important factors.

Wanting to explore this further, wanting to talk about something more interesting than a straight review, and really wanting to drink some of these, my friend Greg and I dipped into our hoards for a very diverse set of bourbons that (with one exception) start off as the exact same whiskey and end up very different. It is also time for Greg's long overdue entry into writing about whiskey.

For our first comparison, we evaluated 2 bottles of Evan Williams Single Barrel, bottled in 2000. What makes this comparison potentially interesting is the variable known as barrel selection. The reason "single barrel" bourbons are potentially fun (but not always superior) is that they can show off just how different seemingly identical barrels can become. Bourbons distilled identically and aged for the same amount of time can differ for a few reasons. Warehouse placement may lead to a barrel experiencing more heat (often in the higher floors of the warehouse) leading to an increase in water evaporation and thus a concentration of flavor, color and alcohol. They may also be exposed to more dramatic temperature changes: this leads to more dramatic wood influence as the spirit is drawn more deeply into and out of the barrel staves. Differences in the barrels themselves may also impart differences (they are from non-identical trees after all); apparently the grain of the wood can also impact flavor. And sometimes, there seems to be no real way to know why one barrel is different from another. Here's a great video  on Drink Spirits by Heaven Hill's Larry Kass about the subject. But on to the bourbons:

This is an annual release from Heaven Hill, adhering to their standard 75/15/10 mashbill. Notably this is not actually a limited release as such; they continue bottling to meet demand each year. It has regularly been around 9 years old is reasonably priced and is a darling of critics, especially the 2000 vintage we opened: John Hansel gave it an incredibly high 95 points in Whisky Advocate, and most other reviews followed suit.

Barrel 192
Nose: More muted. Corn and light vanilla predominate with a hint of sawdust.
Palate: More interesting with an incense spiciness, more cinnamon and cloves and more caramel. Some tannins here as well.
Finish: Nearly identical to the 655
Overall: 80/100

These bourbons are "correct." Really they most evoke the thought: "Yep. That's bourbon." This is not necessarily a bad thing, it's just a really boring thing. If this were a student it would get a "C." The kind of "C" where you really want to give a "D," but you know they will just go bitching to the Dean for an appeal... I really wanted to like these.

Anyway if there is some interest that can be wrung from this experience is how different they are: the nose on the 655 was actually rather nice, while the palate on the 192 had significantly more wood and interest for me. We have no idea where the 95 point rating came from, but I suppose that it may illustrate how different single barrels offerings can be.

Given that the nose of 655 excelled and the palate of 192 won, we decided to vat them together and see what happened. While this was certainly no scientific experiment, we decided our "extremely small batch" bourbon was actually a small improvement, which I think argues for the potential benefits of "vatting" or "batching" (just don't say mixing as it implies the addition of neutral spirits), but more about that  another day.

As Ryan mentioned, these two are clearly bourbon, but just that.  I think Heaven Hill deserves a good deal of respect on the consistency front as both barrels were very similar.  As for differences, 655 had a slight edge in the nose, and 192 a slightly better palate, but both were pretty boring.  In general, I have found that I prefer older American whiskey (old wheated bourbon and really old rye) that are at least 90 proof and neither of these bottles changes my opinion.  At 9-ish years old there is plenty of age here - the vanilla and tannic notes are present and really nice - but I can't help but think that these bourbons would be much improved with a slight bump in proof to say 90-95 (all the Evan Williams single barrels that I have from 2000-2002 are 86.6).  Oh yeah, and let's drop the cold filtration as well and leave in some of those possibly delicious fatty acids.  Both are tasty and inexpensive whiskeys that would be excellent introductions to those new to bourbon - they are lower in alcohol and have no burn when drunk neat and offer very typical bourbon flavors.

But let's move on to why I am so critical of the Evan Williams bottles: Elijah Craig.  More specifically, Elijah Craig 12 year and the recently departed Elijah Craig 18 year (more about that soon).  The 12 year version is routinely available for sub $30 in my area while the 18 year was purchased for $42.  Herein lies the issue.  The EC 12 and Evan Williams can be had for the same price, and I liked the EC 12 more in every way. The additional age and proof gave it a better nose and longer finish.  Plus, the 94 proof makes it a great candidate for a few ice cubes on a hot summer day.  Now, if you are very sensitive to the drier notes that come from extra oak - they are definitely present here - then this may be a negative, but for me this is one of the great values in bourbon.
-----


Anyway, it gets better. This was only a warmup. Next we will look at the effects of aging (Elijah Craig 12 versus 18), the effect of proof and chill-filtration (EC12 versus Elijah Craig Barrel Proof), and just for fun we'll compare ECBP to Parker's Heritage Collection Mix of Mashbills.
Posted by Ryan Connolly at 10:19 AM