Or, how to move from Bourbon to Scotch comfortably 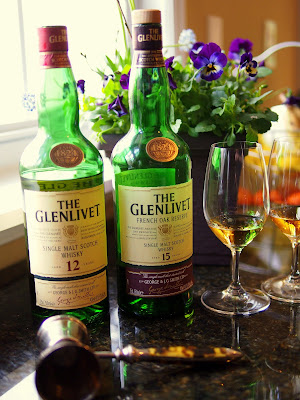 Like many, I cut my single malt teeth on Glenlivet. Prior to this, I thought I did not like scotch whisky, having been exposed to Dewar's white label, J&B and worse. Compared to the Wild Turkey I was drinking at the time (mid 1990s), and even to Jim Beam, I could not really understand how anyone found these enjoyable. I persisted, however, and was thankfully introduced to the Glens by my local bartender, and then later to more esoteric whiskies by my uncle and some of my older friends.

Also, like many, I then transitioned to heavily peated stuff: Ardbeg before they went on hiatus, Laphroaig and (when bought for me as a gift) Lagavulin. Oh how I loved this stuff: I both genuinely loved drinking it and also how off-putting it was to many others. I felt a bit superior, I admit. And I immediately turned my back on the Speysider that gently took my malt virginity. A typical immature young man story. Also typical of younger men, I was broke and so I did not risk my meager cash or gift requests on anything I wasn't sure to like; I had in my house almost no scotch other than Lagavulin, Laphroaig and Talisker until recently. Don't get me wrong: I still have all of these in the house and continue to love them, but as I have matured a bit and my tastes have changed, I have begun to appreciate the occasional subtlety in favor of power. Once in a while.

The two malts I will review today are from Glenlivet. This is the self-proclaimed originator of the single malt phenomenon; virtually all malts prior having been made to be a part of blended whiskies (as is still the case with the majority of whisky produced in Scotland). For those unaware:

Glenlivet is the best-selling single malt in the United states, and is number two in the world, behind Glenfiddich. The distillery, now owned by Pernod Ricard, is the oldest in the Glenlivet parish; part of the Speyside whisky subregion of the Highlands (that around the river Spey). These guys produce about 6 million bottles of single malt per year, with a smaller portion going to blends. Today, I will review the two most entry-level malts they produce: the ubiquitous 12 year and the 15 year-old French Oak Reserve. The latter is by all accounts the former finished in new, uncharred Limousin oak casks (the sort used for cognac) for an additional 3 years.

Palate: Very mild and surprisingly round. Apples and pineapple are back, but along with it some definite vanilla, caramel and toffee flavors. Roasted nuts, mild oak and some ginger.

Finish: Short but with building sweetness. Trails off cleanly with a bit of candied ginger and a return of the more bourbony vanilla/wood flavors

Overall, this is far better than I remember it. This is a well-made, very gentle but pleasant whisky with not a trace of off-flavor to be found. The lack of sherry or peat reveals a pleasantly fruity distillate that is made more interesting by the obvious bourbon influence. It is somewhat mild however, which is not helped by its 40%, and much of its nuance would likely be lost in a setting other than quietly and somewhat autistically studying one's dram. This is a good go-to in a less than well-stocked bar or airplane and would make a pretty good standard to have around the house, as it is very well priced (for scotch).

Nose: Slightly more intense. Much like its brother but with noticeably more caramel, vanilla and a touch of Asian spices. More caramelapple than apple pie.

Palate: Spicier attack. Alcohol seems a bit pricklier. Five-spice powder, vanilla/toffee, a hint of coffe. Other flavors as with the 12, but drier overall.

Finish:  Warmer and more drying, but again spicier and more complex. Longer. Flavors evolve more and seem to switch between bourbon and cognac. Maybe a hint of cough syrup, oddly. Finally the palate is left cool.

This too, is much better than I'd recalled. The extra aging and/or oak treatment lend additional interest that, more than it's sib, invites another sip. This is a lovely dessert whisky that is less subtle than the 12 and combines some interesting spice and new-oak notes with the bourbon and apples profile. My only real gripe with this one is that it's pretty expensive for what it is. Scotch prices are what drove me to American whiskey in the first place, and I just can't see this as worth the same money as Blanton's or the like. Even among single malts, this was only three dollars less than the 94-point beast I reviewed yesterday. I get that this is a different style, but I'm not sure it's worth the money.

In tasting these, I think I have found the perfect gateway from bourbon to Scotch that I did not previously appreciate: the Bourbon barrel influence in both of these is both very clear and very pleasant. Here, though, the vanilla and caramel flavors really play well with sweet fruit and nut notes in an overall more gentle and elegant whole. I cannot imagine a bourbon drinker who would find this unpleasant; maybe just boring. For this reason, I really look forward to trying the Nàdurra sometime soon: I suspect 16 years and an increase in bottling strength could lift this stuff to a much better place.

Overall, I think an occasional return to less intense whiskies is likely a good thing, and these are better examples than many I've had, despite their huge production. Peat in particular, and also sherry are very distinct and, to many, acquired or polarizing flavors to have in ones drink. I think that many start off into single malts and get either big sherry or lots of smoke and end up fleeing back to bourbon or blends, and that is a shame. Starting with one of these bottles is a really nice exercise in retraining the palate to appreciate more gentle and subtle flavors
Posted by Ryan Connolly at 7:05 PM