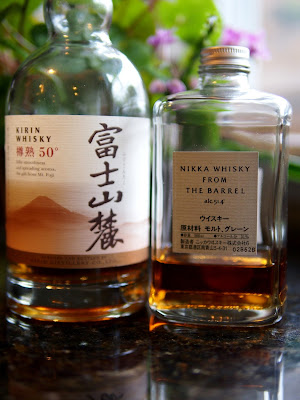 Hi All,
Thanks for the patience during my hiatus; I'm just finally able to start up with this blog again. I will be easing back in with shorter reviews before launching into my usual (excessively?) long format. Today, we have two whiskies from Japan. Those of you less familiar with world whisky may not think that this sounds very appealing but Japan actually has a history of making great whisky dating to the 19th century. Japanese domestic whisky production is very similar to that in Scotland, relying on single malts and grain whiskies (the latter usually in blends) and using peat smoke and reused bourbon or sherry barrels for flavor. For more and excellent reading on Japanese whisky be sure to check out the blog Nonjatta.

Today's reviews will be two high-strength, reasonably priced, primarily bourbon-barrel finished blended whiskies. Though I have tended to avoid all but a very few blended Scotch whiskies, Japanese blends often pull it off really well (Hibiki is a notable example), and these two are no exception.

1. Kirin Fuji Sanroku (foot of mount Fuji) NAS blend, 50% ABV (about $15)
This one is a very well-priced "supermarket whiskey" in Japan, that I added to an order to get free shipping. I initially had very low expectations.

Overall: This is really surprisingly good. There is no mistaking this for a single malt but the grain component here lends a nice, heavy mouthfeel and the bourbon presence lends really pleasant floral and vanilla notes (I presume that the bourbon barrels used were from Four Roses, also owned by Kirin, and you can really smell the similarity). Often, when it is hot and I want a whisky with ice that I do not need to think too hard about I will order a Johnny Walker Black; this does about the same thing for me, for much cheaper. 82/100

2. Nikka Whisky "From the Barrel" NAS blend 51.45% ABV (about $30)
I first had this whiskey in Reims, after a day of champagne tasting. Just writing that makes me pine for my pre-child life a bit... Anyway, The FTB is a marriage of malt and grain whiskies from Nikka's two distilleries, Yoichi (Hokkaido) and Miyagikyo (Honshu). The whiskies are vatted together and "recasked" for additonal aging, then bottled directly from the cask. Unlike the Kirin, this whisky is relatively well-known and gets great reviews, including frequent World Whisky Awards.

Finish: Seamlessly trails of from the palate for a few minutes. Despite the high strength, this warms rather than burns.

Overall: This stuff is just great. It holds its alcohol percentage very well and provides a much more nuanced and polished presentation than the Kirin. At the same time, it has a complexity and power that keep it from being a smooth, boring whiskey. Though not stated on the packaging or website, there seems to be a definite sherry influence here in addition to bourbon barrel. There are also some oak notes here that seem really rather exotic; I don't know that any of this was aged in the famed Mizunara oak, but I'd not be surprised. I'd love to know the cooperage regime here, as it is truly pretty interesting. 89/100
---

In much the same way that the Japanese seem to be able to turn out a high-quality, reasonably-priced version of just about everything, these 2 blends absolutely destroy any blended Scotch competitor even close to their price range. The Kirin can totally replace any inexpensive blended scotch for on-the-rocks drinking, and I would imagine the Four Roses nose would also appeal to bourbon drinkers. The Nikka is also just a stunning value: though a blended malt, I think it can hold its own with any unpeated scotch up to easily twice its price. The only real problem I see with either of them is that they are not imported into the US.

Next up will be a less glowing review...
Posted by Ryan Connolly at 1:18 PM