You down with OGD?

Having flirted with outlandish spirits for a while there, I am firmly back in the US with a 2-part series on the bourbons made at Jim Beam's Cleremont distillery. Beam currently utilizes 2 bourbon mashbills, one with a traditional 15% rye and another, 27% high-rye version. The latter serves as the base of the venerable Old Grand-Dad series of bourbons as well as the more up-market, "small-batch series" Basil Hayden (which was OGD's name, by the way).

Basil Hayden, Sr. himself was a prominent Maryland Catholic who led a mini-Exodus to Nelson County Kentucky in 1785 and promptly established the first Catholic church in Kentucky. Like the similarly famous Elijah Craig, this religuous man was also a distiller, and one known to favor a higher proportion of rye in his whiskey. His grandson, Raymond B. Hayden founded a distillery in Nelson County, Kentucky  in 1840 and named it in honor of his "Old Grand-Dad." The distillery would change hands a number of times over the years: in 1899 it was sold to the Wathen family, who would later form the National Distiller's Group. An interesting note is that this group was one of the few able to continue production through prohibition, producing OGD as "medicinal whiskey." I've yet to prescribe whiskey myself, but I'm sure there is an indication somewhere... Anyway, in 1987 ND sold the brand to Fortune Brands that would become Beam Inc. (NB to the dusty hunter: if it says "Cleremont" on the label it's Beam, if it only says "Frankfort," then you've found an ND dusty... or so I'm told, I've never had any luck in this regard.) If you like this sort of history, be sure to check out Mike Veach's new book, where (along with wikipedia and straighbourbon) I so far have gotten the info for this blog.

Fast-forwarding to today, the market for American whiskey is currently exploding, as I'm sure you are all aware. This piece in the Washington Post noted that Basil Hayden is the fastest growing in Beam's portfolio, having grown 35% in 2012. I rarely hear people talking about it so it is hard to know what to make of this. However, I also find it notable that as part of its growth, they have dropped the 8 year-old age statement. Beam high-rye mashbill and NAS? Sounds like Old Grand-Dad to me. Not that there is anything wrong with OGD, I find the 114 one of the best values in bourbon: near-barrel proof, high rye and $20 on sale. However if all you are going to do is water this stuff down and put a fancy label on it for $40, I begin to wonder. No one is confirming that NAS Basil is exactly that, but I've my own suspicions.

As a preliminary survey of the differences between the current Beam high-rye expressions, I picked up a few minis of OGB (86 and BIB) to taste against the mini of BH I got as part of a "small batch" sampler (we'll be seeing the others in the next post). Of note, I did not have any OGD 114 handy at the time of the review; nor did I have the new NAS BH or the new, 80 proof OGD. Can't say I'm really excited about the latter two in any case. But on to these guys: 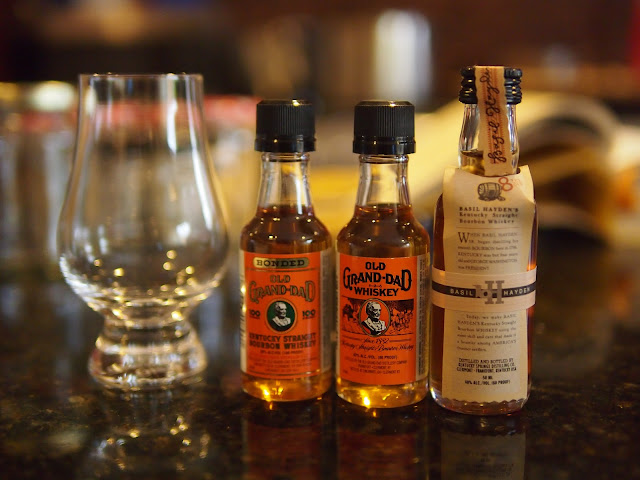 Nose: Wood heavy with worshop and hot-attic notes. Earthy Beam yeast is definitely here, as are rye and spice notes, especially cloves. Also notable is orange zest, leading to a pomander-like smell with the spices. More faintly chocolate and butter. A bit woody, but a nice nose

Palate: Very spicy attack with ginger, cinnamon and cloves, distinct rye as well as oranges. The mouthfeel is very thin and among the driest bourbons I've tried. Wood and yeast here as well. Interesting but also very hot and "angular."

Finish: The finish echoes the palate, trailing into spices and butter. Very clean and relatively brief.

Overall this is a nice high-rye bourbon. I think that the wood predominates a bit much and it is a little lean and dry for my palate, as well as a bit thin, likely due to the low proof. It's a nice enough drink, but I think the price is higher than Bulleit and Four Roses, high-rye competitors that I find superior. 85/100

Nose: Similar, but less intense that the BH with wood notes essentially absent. Caramel here that is not present in the BH. Less yeasty as well but overall a more corny/generic bourbon nose than the BH. It's pretty faint.

Finish: The finish is warm and sweeter than the BH.

Overall this is a simple, serviceable bourbon that shares an obviously similar flavor profile to the BH, but with overall less intensity and interest. Not really interesting enough to drink straight and I'm not sure it wouldn't get lost in a cocktail. 82/100

Palate: A big payoff here. After a barely improved nose vs. the 86, the palate has very good weight with balanced sweetness, butter, caramel, and loads of rye/spice notes. The only detractor here is a very high level again of the (to some people off-putting) Beam yeast notes. Notably not much hotter subjectively than the 86

Finish: The finish is warm and sweeter than the BH, as with the 86.

Overall this is very well made bourbon, a great representation of the high-rye syle and really a bargain at $20. It still lacks some of the complexity of the BH but it makes up for this with power and more balanced sweetness. I think it's a dead heat between this and the Basil Hayden. 85/100

Summary
So, I have to say that I expected things to go about like this. The BH is certainly the most complex, but I don't know that it makes it any more pleasant. It certainly does not make it, to my palate, worth a 100% premium over the OGD BIB and there is absolutely no way it is worth 2 bottles of the 114. All of that said, this should really read as praise for the underpriced and over-delivering OGD 100 and 114 than as a criticism of the Basil Hayden's.

Posted by Ryan Connolly at 5:51 PM