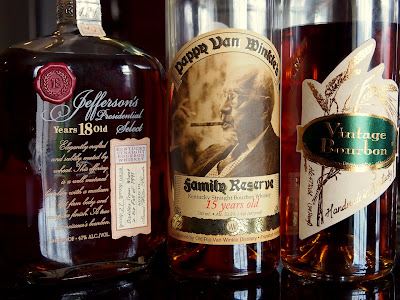 Including, in my opinion, the best wheater at any price I've had.

Welcome to the last installment of this series on wheated bourbons. I have found, in drinking the spiritual heirs to Stizel-Weller that there are some very good whiskies in this segment, and that price does not always equal quality. I have also found the market to be a bit crowded with a number of expressions that I don't have a lot of time for. This is because, in my now reasonably extensive experience, wheaters really only become impressive after fairly protracted aging, around 12 years. I find wheated bourbons younger than this to be good, easy-drinking spirits, but I can't say that they offer much to my palate beyond standard low-rye bourbons. I think it is a shame to drink in their youth such bourbons as these will become in their age. I'm sure I will enrage OWA and Maker's die hards, but de gustibus non est disputandum.

I have also decided to finish the series here, with these three, and leave critical reviews of the Old Rip and OWA for another time. I'm getting a bit of wheater fatigue, and you too may be hoping I will move on. So, tasted neat (as I just really can't enjoy water in my bourbon unless it starts at over 50%):

Vintage Bourbon 17*
47% ABV Bottled by Kentucky Bourbon Distillers, $64.99
This prosaically named and hideously packaged bourbon was likely distilled at the Bernheim while it was owned by United Distillers. At this time, UD had just closed the S-W plant and were producing Old Fitzgerald and Weller products there (the plant would later be sold to Heaven Hill and the Weller brand to Sazerac). Some of the bourbons in the Van Winkle line have a proportion of this distillate as well. As such, this stuff has a pretty good pedigree (unfortunately, it seems to have been discontinued and, like many non-distiller labels, it is impossible to confirm any of this).

Nose: When poured into the fancy snifter I decided on today it fills the room with buttered apples. It smells like pie is about to happen.The nose also has some well-tamed alcohol, brown sugar, and no hint of acetone or other organic compounds.

Palate: The mouthfeel is weighty and smooth. The initial attack brings caramel, more buttered apple, pastry dough and a higher than average level of sweetness.

Finish: moderate length, very warming and pleasant. Apples and pears continue for some time, and no bitterness or real burn is detected. This one really asks you to have another sip.

Overall this is a very well-done effort. If it has a failing, it is somewhat simple and sweeter than average. However, with it's intense and pleasant flavor profile and very nicely integrated oak, the apple pie and sweetness thing makes this an exceptional desert bourbon and cognac alternative. I just wish I had more.

Like the JPS17 that I had and loved last year, this bourbon was distilled in 1991 at the Stitzel-Weller distillery before it closed. Unusual for an independent bottler to tell us where the bourbon comes from, but in a world where kidneys are sold to get a bottle of Pappy, the S-W name sells. M&K do have a 21 year JPS coming out, but it looks unlikely to be from S-W or even wheater. But on to this one:

Nose:Wood. Woody, woody wood. Sort of nice wood, though, like walking into an antique shop in New England. Some incense, some cherries in there somewhere, vanilla and maybe a hint of milk chocolate. Orange zest too? All of the latter are initially overpowered by the wood, but as the wood blows off, they come to the forefront.

Palate: Again woody. There initial sweetness with vanilla and caramel, as well as faint cherry and maple, but it then feels like it dries up and  falls into a hole: the midpalate is full of dried grass, dried wheat and pencil shavings. There is also some bitterness toward the end.

Finish: The finish is long, but that nagging, grassy note dominates. Also pencil wood, citrus and some faint spices.

Overall, I'm finding this a lot less pleasant than the 17, as well as the last glass I had in a bar.  I suppose batch variation is a partial culprit, but I really think they left this guy in the barrel way too long. As I mentioned in a previous post, this stuff really comes alive with a few drops of Stagg, and I found the same with the addition of a few drops of Pappy 15. In both cases it was totally salvaged and really enjoyable. But I think $90 is too much to ask for a bourbon that needs "correcting." It is probably still worth trying, just to get some S-W into you, if you've never been exposed, and also worth seeking out if you can find a better batch than this one.

Pappy. Just saying the name makes liquor store owners shudder. As the most sought-after bourbon in the world, it's popularity at this point is based mostly on the fact that you cannot buy it anywhere. It used to come out twice a year, with the 15 year around $50-60; it's now down to every fall for $100 in many places, and we see it on Craigslist and (illegally) on Ebay for hundreds more than that. It's become the holy grail of bourbon hipsterdom and a great illustration of the fact that nothing makes people want something more than to be told they can't have it.

The 15 year was initially introduced as a line extension to the  original, 20 year-old Pappy (a 23 was also introduced), which I find more refined but less pleasurable at its lower proof. My one tasting of the 23 is lost in the mists of time. The bottle I have in front of me is likely a mixture of bourbons from Bernheim (like the V17), S-W (like the JPS18) and Buffalo Trace. Eventually it will (like the current Old Rip) be a 100% BT product.

Nose: When poured, the room again fills with the buttered apple aroma as with the Vintage 17. The oak is also there, more like the JPS and with the same antique-store and incense note. Cherries are also present as are caramel and vanilla. It is easy to smell what each of the Bernheim and S-W bourbons bring to this; harder to say with the BT, but their products are relatively neutral and 'clean' overall so this may not be surprising. This is a much better balanced nose than the JPS and more complex and interesting than the V17.

Palate: The attack is more aggressive here, likely due to the higher proof. There is butter, a touch of acetone, vanilla, brown sugar, dulce de leche,apples and a hint of coffee. The sweetness is medium and the body is huge.

Finish: the finish echoes the palate and, by virtue of the 53.5%, goes on for days. It is very warming and satisfying, leaving apples as a final note. There are no off notes and when the finish finally fades, the mouth feels clean.

I'd like to be contrarian and say that the PVW is more hype than substance, but I could honestly drink this stuff for days. It is really the platonic wheated bourbon and I can think of no way to improve upon it. It was the best value in the whiskey world when it was $60, and it remains well worth the $100. Why is it so good? I have a few ideas:

Conclusions
After all of these wheated bourbons, I will continue to buy Pappy 15, provided it doesn't reach much higher prices. I will also not turn down a Vintage 17 if I find it. I think I may well hoard a small amount of Weller 12, for when I'm in the mood for a wheater and it's not a special occaision, and I will also buy more of the Old Rip, which is supposed to be in better supply this fall. It'll be twice as expensive as OWA, but I think it's twice as good. I will probably not be buying any more Van Winkle 12 (lot B), any more OWA or WSR and will probably make my WLW decisions on a case-by-case basis. I am fortunate enough to have a hoard of Pappy and WLW that would see me through a medium-sized zombie apocalypse, so I think I will likely overall shift my money away from wheaters.

This leads me to a final thought. I love Pappy, and I really like most of the wheaters I've tasted. However, to my palate, only the PVW has held a candle to George Stagg, Van Winkle Rye, Sazerac 18, Hirsch 22, or special editions of Four Roses. I know I don't like wheaters as much as straight ryes, and I'm beginning to wonder about my feelings about them compared to high-rye bourbons... I guess that might be the next series to discuss. 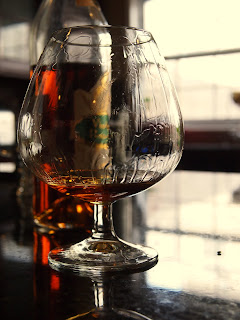 If forced to rank-order and give scores to the wheaters I've had this year since  (with price as a consideration), I would rate them:

*Note that older expressions of Vintage 17 were actually rye recipe bourbons
** I use Vatting, versus blending, as the latter connotes the blending of bourbon with inferior grain spirits as is "blended whiskey," aka bourbon flavored vodka.
Posted by Ryan Connolly at 4:29 PM