Elijah Craig 12 versus 18: The Effects of Aging 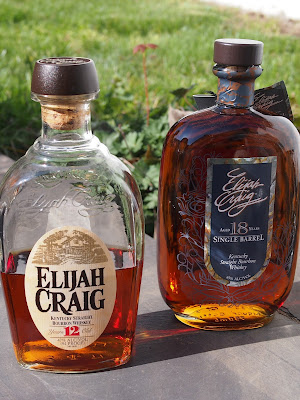 Next up in our series is this comparison of Elijah Craig 12 year and Elijah Craig Single Barrel 18 year. The most obvious and most dramatic difference between these two is their age. The 18 is from a single barrel and is 2% lower in ABV, but otherwise these guys start off as the same 75/15/10 distillate at DSP-KY-1. (Thanks Eric, I totally forgot that this 18 was distilled in 1990 and so would have been made at DSP-KY-31; the 12 was at the new plant).As such, these provide a good example of the effects of barrel aging.

When bourbon is aged in its required charred oak barrels, a number of things happen: flavors are extracted from the wood, very slow chemical reactions take place, and evaporation occurs. All three are important, which is why just putting the stuff in a small barrel (as many start-ups do) or mixing it with wood chips does not result in good whiskey as oak flavors are extracted, but little else occurs. (Thanks to my fellow reddit users, especially the flavor chemist, “Flavorless” for expanding this. I have also heavily relied on the text and references from the excellent blog Whisky Science)

Charred Oak Extracts
All bourbon and straight rye whiskies are aged in new, charred oak barrels. Charring is a process where flame is applied to the inside of a barrel to form a layer of charcoal. This can be done for varying lengths of time, resulting in the different “char levels” used by different distilleries. Burning the oak in this way produces reactions that form free sugars that react with proteins. Well these sugars burn (caramelization), they form a lot of the aromas that we associated with caramel, bread, burnt sugar, beer, coffee etc. This burning process has made a lot of new chemical species that are released through smoke, but after the charring is done some compounds remain in the charred wood.

Some of the compounds related to flavor are as follows:

Lignins are polymers (long and chain-like molecules) that in the case of oak lignins, have different sugars and aldehydes attached to them. These compounds break down during charring or toasting, but also over time in the native wood to provide a number of characteristic aromas like smoke, spice or floral notes. Most notably, though, are the vanillins, which lend the characteristic vanilla flavor to bourbon.

Lactones occur in a number of conformations and impart coconut-vanilla aromas or a more incense-like aroma; I love the latter when I come across it.

In addition to imparting beneficial flavors to the spirit, the char layer also serves to reduce unpleasant and immature ones. Simplistically, charcoal tends to bind and draw some off flavors out of the whiskey (like your Brita filter), while others are extracted into it.

Native Wood Extracts/Reactions
Beneath the char layer of the barrel, native, uncharred wood remains. As you might predict, this contributes flavors and aromas that one would expect from dry wood, specifically oak. The compounds in this layer contribute to the "oakiness" of the whiskey over time. Oak from different areas and of different species may contribute different flavors. In wine this is why American oak (much more vanilla flavor) is very different than French oak (spicy as well as dill-like flavors). For the whiskey to extract compounds from the native wood, the liquor needs to first pass through the char layer. It is a slow process for the spirit to diffuse through the char layer, and again a slow one for it to extract native wood flavor compounds.

Most of these compounds are actually bound to polymers (such as the lignins above) that do not readily extract into the spirit, and so must be liberated by hydrolysis reactions that “clip” them off the chains of larger molecules to which they were bound. Once freed, these compounds can be incorporated into the spirit, which must then diffuse back through the char layer (which may filer out other compounds, see below).

As the spirit slumbers away in the wood, seasonal variations in temperature cause the barrel expand and contract and spirit is drawn in and out of the wood, allowing passage of the spirit through the char layer as discussed above. The rate at which this occurs is dependent on a number of factors, including the humidity and temperature of the warehouse as well as the temperature shifts that occur; the more dramatic the temperature changes are, the greater the transit of the spirit in and out of the wood will be. The tightness of the oak grain and the species of oak can also affect this (though American whiskey uses almost exclusively the Quercus alba species).

Other Reactions
In addition to extraction of the charred oak flavors there are other, slower reactions that take place in the barrel. Notably are those involving tannins; familiar to anyone who drinks red wine. These compounds lend mouth-drying astringency to red wine and this effect can also be found in whiskey. Tannins are also involved in a number of chemical reactions that break down unpleasant flavors in the spirit and oxidize alcohols to the ethereal top notes so valued in extra-aged bourbons (the acetone or ether-like aromas in Pappy or Stagg, for example). Tannins also serve to stabilize color.

The important thing about all of these factors is that they take time. The extracted flavors (lactones, vanillins and others) actually come out of the wood relatively quickly (likely by the time a standard 4 year-old bourbon is dumped), but the breakdown of polymers and the reactions with tannins are not very fast at warehouse temperatures and are actually slowed down by alcohol, so it is not unreasonable to expect years or even decades worth of continued flavor evolution from a barrel of spirit, accounting for the increasing complexity of extra-aged whiskies.

Evaporation
In addition to imparting wood flavors, the barrel also serves as a semi-permeable membrane that allows passage of water and alcohol but little else. As such, part of the contents leave the barrel as the "angel's share" each year; about 8% the first year and about 3% per year thereafter. If this occurs in hot, dry environments (high warehouse floors), more water is lost, leading to higher proof spirits (like Stagg); lower floors and higher humidity lead to more alcohol loss (e.g. barrel-strength Four Roses at near 100 proof). Either way, the flavors are concentrated. This typically leads to a more intense spirit, and also one that is significantly more expensive (by our math an 18 year-old barrel will have lost 60% of its original volume)!

So, there really seem to be two phases of barrel maturation: an initial, extractive one and a longer maturation phase. Most young bourbons on the market are basically bottled after the extractive phase (they have pulled out a lot of oak flavors and have had new-make flavors tamed by the charring). However, the truly special whiskeys make it through many years of concentration and chemical reactions that lead to much more complex complements if volatile chemicals and thus more complex aromas and flavors. That said, it is actually an art to produce such whiskies, as there is a reasonably high risk that too much time in a barrel can lead to whisky that is just too "woody."


Anyway, on to the reviews at hand:

Nose: volatile, acetone, vanilla, nutty
Palate: possibly the weakest part, slight astringency and a little alcohol poking through, nice buttery and vanilla notes (I like the tannins here, however)
Finish: long but subtle finish, the flavors and tannins coat the mouth and are slowly released over time or after a drink of water, very nice.
(Bottle was from Barrel #3893)
Overall: 92/100

Both of these bourbons were far and away better than their Evan Williams cousins. The 12 year just exceeds the EWSB in every way and is the same price, higher proof and is easier to find. Everyone should go buy one of these that has not tried it and should give it serious consideration for official bourbon of the summer: it is great neat, actually handles rocks well and is cheap enough to share with your friends that want to put coke in it.

The 18 year was for many years the most affordable extra-aged bourbon and is now universally missed. It has become, in Greg's words, the girl from high school that you never really noticed until she was gone. I will pull a hipster and assert that I liked it before it was cool: I thought it stood up well to Pappy and was criticized for this. But even I took for granted that I could pretty much wait for the periodic sales when it would dip below $40 and not give it too much of a second thought. Now it is off the market in favor of the $130, 20 year version. God I wish I had bunkered a case of this stuff. That said, your experience may vary a bit as with all single barrel products, but definitely buy this if you can find it. If you do not enjoy it I will happily dispose of any unused portion.

Overall, I think these are two excellent examples of the best features of Heaven Hill: very well-made, very well priced, and very classically styled bourbons. These may not be the absolute pinnacle of bourbondom, but I'm pretty sure that if you don't like these, you don't like bourbon.

Greg's Thoughts
Elijah Craig 18 year is not a current product.  This makes me sad.  I had only had it two times before it got the axe - presumably to make way for the MUCH more expensive 20 year version on shelves now - and was underwhelmed the first time, and modestly impressed the second.  The second experience motivated me to grab 3 bottles when I heard it was being retired, and that is what makes me sad.  I should have gotten more.  A lot more.  The EC 18 is somewhat similar to the Eagle Rare 17, and that is a great thing.  While the 2011 and 2012 ER 17 needed a few months of air to transform into something wonderful, this bottle has been great from the first pour.  It has those wonderfully interesting tannins that you only get from a long time in barrel and I love it.  I am not as good with flavor descriptions as Ryan, so I will sum up my review thusly: my Evan Williams vintage 2000 has been open for over a year and is 40% full, the EC 12 open for a year and is 25% full, the EC 18 was opened 2 weeks ago and probably won't make it to a month old.  The only caveat is that the EC 18 is a single barrel product and I have read reviews of variable quality.  That being said, if I can find any lightly dusty bottles still on the shelf for sub $50, I will not hesitate to purchase more.

Posted by Ryan Connolly at 9:21 AM