Then did he raise on high the Holy Hand Grenade of Antioch, saying, "Bless this, O Lord, that with it thou mayst blow thine enemies to tiny bits, in thy mercy." And the people did rejoice and did feast upon the lambs and toads and tree-sloths and fruit-bats and orangutans and breakfast cereals ... 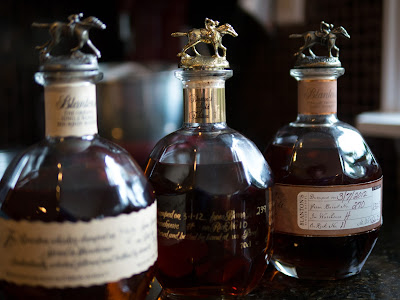 Blanton's has always pleasantly reminded me of the Holy Hand Grenade of Antioch (known to the observant as the globus cruciger), but unlike the symbol I first remember seeing in terribly boring and neurosis-inducing CCD classes, I've nothing but fond memories of Blanton's. As the first successful single-barrel bourbon, Blanton's was the late Elmer T. Lee's  gift to the bourbon world and the beginning of bourbon's rise to its current place of recognition as an equal among world-class whiskies.

The unfortunate, recent passing of Mr. Lee (more thoughtfully eulogized in many recent articles by those who knew him than I could do justice to by adding my own) has put us all in mind of his efforts and legacy in the bourbon world. I have been excited by the prospect of the next two posts for some time now, as I have in any case long been a fan of bourbons made with the "#2 rye bourbon mashbill" of Buffalo Trace. This mashbill is often referred to as BT's "high-rye mashbill", but at ~15% rye this is really about the average for traditional bourbon, though higher than the ~8% mashbill used for the "#1" mashbill used for the Stagg, Eagle Rare, and Buffalo Trace label bourbons, which is one of the lowest in the industry.

As a point of trivia, the #2 MB Brands (Ancient Age, Blanton's, Eltmer T. Lee, Hancock's and Rock Hill Farms), while distilled at BT, are actually owned by the Takara Shuzo Lrd Co, who acquired Age International a few years back. This is why the Japanese get more Blanton's variety than we do. I wonder if this is also why my prayers for a #2 MB in the Antique Collection have gone unanswered for so long...

Last weekend, my friend Greg and I sat down to try to get a handle on the 3 major expressions* of Blanton's: The Original Single Barrel, the Gold Edition, and "Straight from the Barrel." Only the Original is available in the United States; Greg's SFTB came from Master of Malt, and I traded for the Gold (thanks again u/dementedavenger99). All 3 of these are single barrel bourbons from the same mashbill, aged in Warehouse H, distilled to 140 proof, and entered into barrels at 125 proof. While there have been speculations about different ages and barrel selection profiles, the clearest differences between them are the bottling proof: Original is bottled at 93 proof, Gold at 103 and SFTB at cask strength. On to the tasting (note these are all single barrel bourbons, so variability is to be expected): 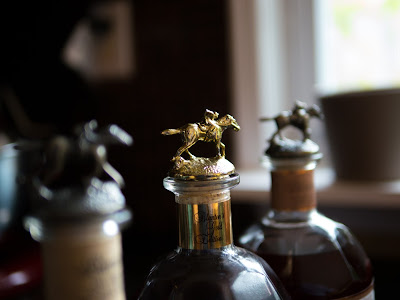 Overall, this is a very classic and very well made bourbon. I would almost go so far to say that if you don't like this, you don't like bourbon, as this is basically archetypal, if maybe a little sweet. My only gripe is that $50 is a little high for ~8 year old bourbon made in this quantity, even with the inclusion of the nice stopper and the velvet bottle scrotum (bag? cozy?).

Overall this is a small but clear step up from the Original, it is basically Blanton's but modestly better in every way. It is hard to imagine liking Blanton's Original and not liking this a little bit better. I think that this is almost 100% due to bottle proof, as watering it down to the 93 of the Original yields a bourbon that while not identical (perhaps due to barrel variation) seems much more parallel.

Blanton's Straight from the Barrel Bourbon (Barrel 270, dumped 3-7-12, 66.25% ABV)
Nose: More alcoholic, a bit burning to the nostrils. With air ether/acetone notes join the alcohol as well as some rye spiciness, followed by wet oak. Much less fruit here.
Palate: Hot, numbing. Still sweet like the others, with prominent vanilla and butter. Some molases as well as cookie spices.
Finish: A bit numbing due to high ABV, but very long and overall pleasant and echoing the palate.

Overall, this seems less complex and more alcohol dominated in a way that makes me think that it may actually be younger than the other two. Watering it to 103 does not yield gold (with again the caveat that barrels vary); the result is much more thinner, a bit lighter in color, less sweet and less complex. I like it less than the Original, even at 103 proof. As it is not 100% pleasant to drink at barrel strength, and less pleasant diluted than the others, I'm afraid to say this may be my least favorite of the three.

In summary, this was a very enjoyable survey of some of the more elusive Blanton's expressions, and here is my final take:

Blanton's Original is excellent bourbon, full stop. It is, however, a bit overpriced consigning it to the category of bourbon to buy when you have no access to limited releases and want to throw money at the problem. A fine gift and a nice occasion bourbon. I would buy loads of it for $30. As is, I would happily get rid of all of it for more access to Gold in the US.

Blanton's Gold is much more clearly a premium product, and one that provides an "A-Ha" moment when first sipping. This is the version that I think should be the one we get, if we get only one, and would be worth the $50 the original now commands. If they were to present us with this, there may not be so many bottles of Blanton's in every liquor store I've ever been to. As it stands, I think this is actually worth seeking out for fans of the Original.

Blanton's SFTB is a bit of a disappointment. Maybe it was the barrel I got but I was excited for this to be the most intense and enjoyable of the three, but it was just more alcoholic. The disappointment came from the sense that it had more alcohol without a proportional increase in flavor, which was seen when watering it down. Whether or not my suspicion is true, this tastes younger to me and in any case I prefer the Original, so there is really no reason to buy this.

Next, we will examine whether a $33 plastic 1.75L of Ancient Ancient Age can stand up to any of these, and then we will look at 3 iterations of the Buffalo Trace Experimental Collection that all treat this mashbill in very different ways.

*There is also an 80 proof version that I assume mainly exists for markets who tax proof excessively. By all accounts (as if the 80 proof weren't enough) this is not worth trying to smuggle/import. There have also been silver and black labels for duty free editions.
Posted by Ryan Connolly at 6:17 PM