Hi all. Sorry for the lapse in posting, this fatherhood thing is a bit demanding, but I think I am getting the hang of it (mostly thanks to my very dedicated wife) and so am back and will try to crank out an article on a weekly basis if I can. 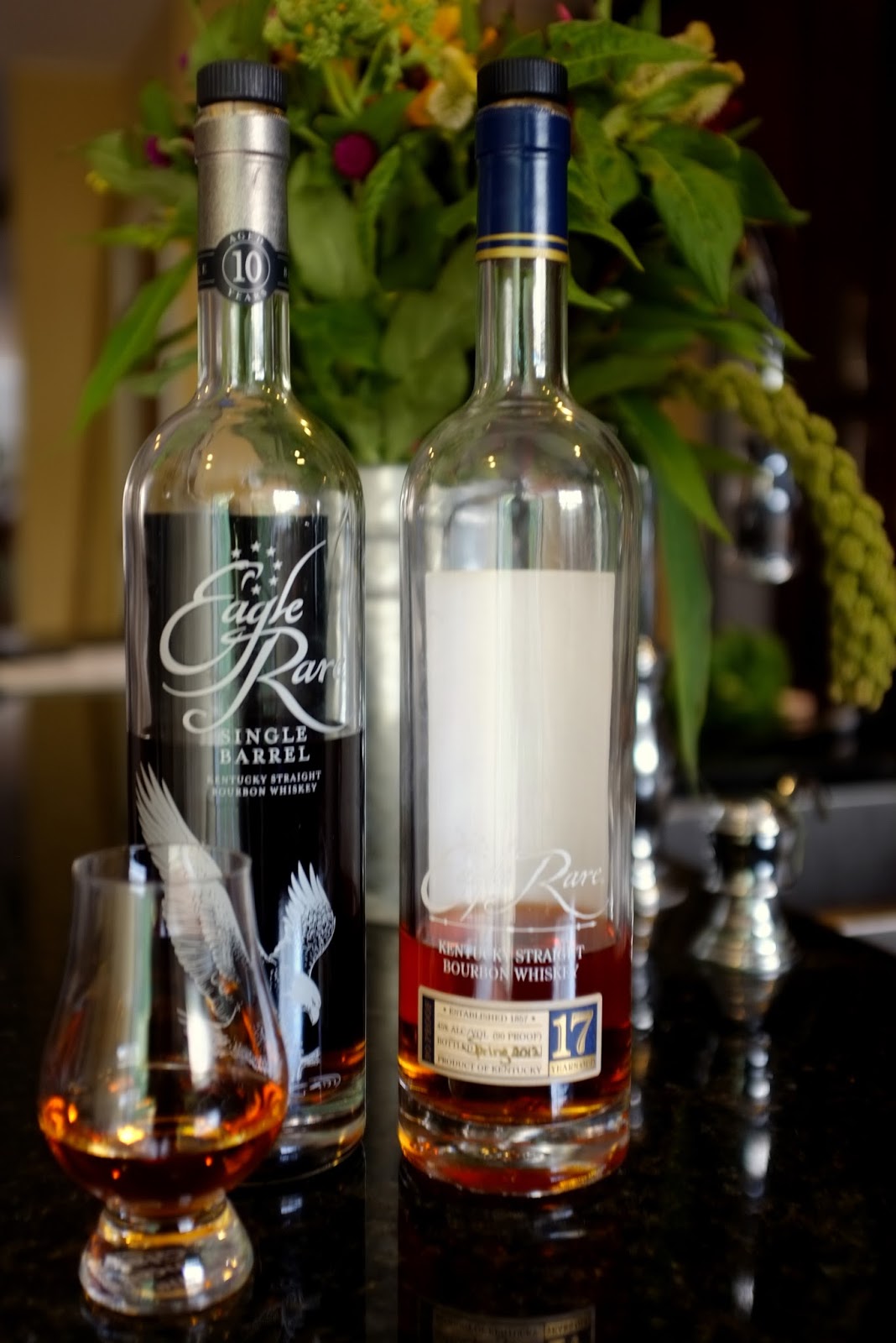 This post was inspired by having bought the best bottle of Eagle Rare 10 year-old (ER10) that I have ever tried. As a widely-distributed single-barrel bottling, this one varies quite a bit, and while I have always liked it as a very well-priced representation of the Buffalo Trace mashbill #1 (low rye, also seen in Old Charter, Buffalo Trace, George T Stagg), it has sometimes erred on the soft and sweet side for me. This has been in contrast to the Eagle Rare 17 year-old (ER17) that I have long felt to be an underrated member of the Buffalo Trace Antique Collection (BTAC).

I used to think that ER17 was sort of useless; if Stagg is about the same age, same mashbill but barrel-proof, why would I buy the same thing at 90 proof for the same price? Well, the recent releases of ER17 have actually been closer to 19 years, I hear, and I think barrel selection also plays a role. Finally, there is something that seems to happen with a few months of airtime to the 17 that I just love: it maintains the sweet and soft ER profile (in contrast to the spicier Stagg profile) but gains the "age" notes that I have often admired in extra-aged bourbons and ryes that is not evident when you first pull  the cork. So:

Eagle Rare 10 year-old KSBW (distilled by Buffalo Trace, $26, 45%ABV)
Nose: Lots of fruit, mostly apples and some pears, then honey and a trace of anise. Less of the usual caramel and vanilla, though these are also still here.

Palate: Heavier than I remember with lots of oak and tannins. Still sweet, but with texture from the tannins. Chocolate, caramel, fruit and hints of grass and sap.

Overall:
This is a fantastic bottle of bourbon and better than any other ER10 I've had. I went back and bought the 2 remaining bottles that seemed to be from the same barrel. Though this one stands out above other bottles of ER10 I've had with its extra fruit and wood (really hits the sweet spot of youth and aging), I overall have to say that I think ER is underappreciated. Near me this is usually only a couple dollars more than standard Buffalo Trace, and I think it brings extra refinement and depth of flavor from aging that make it a pretty exceptional value.
90/100

Palate: Drier and yet woodier, though not to the point of being overoaked. Coconut here, along with some almond, toasted bread, custard and  cherry.

Overall: This is clearly a close relation to the 10 year-old, and when first opened, I think it tastes pretty similar. On my second bottle of this now and I think it consistently improves with a few weeks to a month of airtime, when it develops much more pronounced "secondary" flavors of coconut and almond and the ethereal notes that I like so well come out. This is also nothing like Stagg (even Stagg diluted to 90 proof), despite the mashbill similarity, which goes again to show how much warehouse placement and barrel selection must come into play.
93/100

These bourbons illustrate how my palate has changed over the last few years: when faced with my yearly BTAC wish list it used to be Stagg>William Larue Weller>Sazerac 18>Thomas H. Handy>ER17.  This is probably close to the internet consensus, and I hope it stays that way, because I'm going after a different list this year. I think my whiskey tastes are following my wine palate: I started out loving 15% ABV highly rated fruit bombs, but have settled into enjoying balance and nuance more. I no longer find most barrel-proof monsters all that pleasant (though I will probably buy a Stagg Junior and regret it).

Given this, for October, I have now settled on: Sazerac 18 (I'm going to buy as much as I can reasonably afford this year as perhaps my last chance to really stock up on aged rye), followed by ER17 (such is my newfound love for it) and maybe one Stagg, because it is fun and one of the few barrel-roof releases that retains complexity and balance. No WLW (I like it no where close to as much as Pappy, and about the same as the $25 Weller 12), and no Handy (It's fun, but it's really just barrel-proof Sazerac 6, as I either mix or dilute Handy to drinking strength, the $30 Baby Saz it s much better deal).

Anyway, October is still a long way away... Will try to be back next week.

Posted by Ryan Connolly at 5:53 PM