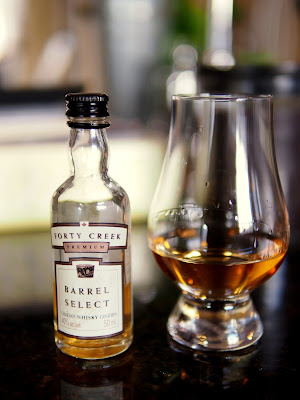 My last review, of Jefferson's 10 year rye, a sly Canadian, drew a bit of discussion over on Reddit, generally (as I did in my post) bemoaning the poor reputation of Canadian whisky (sometimes undeserved), and noting that there are some rising stars. One of these is John Hall, who makes Forty Creek, a newish distillery that has won much praise for their special releases, especially the Confederation Oak, which won Whisky Advocate's Canadian Whisky of the Year, with a stellar 95 point rating. It was, then, a nice coincidence that I found a 50mL bottle of Forty Creek Barrel Select on my weekend shopping rounds yesterday. Though no where near as highly regarded as the confederation oak, the incomparable Ralfy gave this bottling an 89/100.

This expression  is their basic entry, and the only one I can easily get my hands on. Bottled at 40% (ಠ__ಠ) this goes for around $23. This one apparently marries corn, rye and malt whiskies aged separately in barrels of varying char in order to allow the blender flexibility to produce the intended profile. An interesting approach, but I'm suspicious that like Irish or blended scotch that the good stuff gets extended with base whisky at this price point.

Nose: Butter, custard, vanilla (specifically vanilla yogurt), and caramel. Also dried pears, a touch of roasted nuts, and a subdued -but still present- grain/rubbing alcohol note. This latter is what usually steers me away from the Canadians, but it is faint here: overall a nice nose.

Palate: Gentle and sweet attack with noticeable malt influence. Starts off like Irish or a sweeter blended Scotch in this regard. Corn sweetness follows with only a small amount of rye spice. The alcohol is not very well controlled here and seems far higher than 40%. The palate is thin.

Finish: Noticeable spirity burn, then a lingering hint of the cheap vodka we drank in college. Maybe a touch of rye in there and a faint perfume note. Really falls apart here.

I really hoped for more out of this, and what is frustrating is that I can tell there is good whisky in here. I think the blending process went awry, leaving it to seem disjointed and not well-integrated. Also, there is just too much spirity heat, I'd guess from too much base whisky. I understand that this is $23 whiskey, but I'd far rather pay more and get more rather than have some really good stuff watered down with alcohol and water. Even at this price point I can think of many bourbons that thoroughly crush this spirit.

All of that said, I suspect that the upper-level offerings from Forty Creek are quite good, as this tastes like it has that potential. Further, based on the Jefferson's I last reviewed, it is clear that Alberta seriously knows what they are doing, and I'm told Wiser's does too. For these reasons, I will continue to have hope for Canadian, but will leave off drinking or reviewing Canadian whisky until these higher quality offerings are available to me.

*You may notice that I have begun to adopt the widely used, and widely controversial Robert Parker 50-100 rating system.  I was initially against this, and still think that it connotes an impossible level of precision, but since I have increased my involvement in the Reddit r/bourbon and r/worldwhisky fora (who like a rating) I have started. I also think that it is not a terrible way for a reader to get an idea of my comparative feelings about whiskies. I will note, however, that I try not to take price into account with the ratings to the extent that it is possible. However, I suspect I under-rate expensive stuff, because I really think it has no excuse when not stellar.
Posted by Ryan Connolly at 5:47 PM