The Third President of Canada? 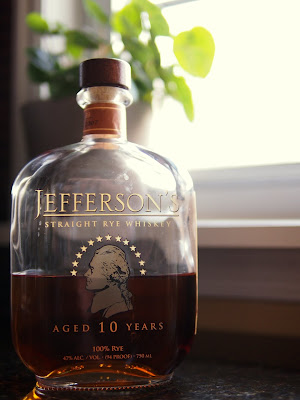 Today we have a review of a rare beast in the American market:  an affordable rye with a bit of age on it. Nearly everything else in current production is 6 years old or younger or else carries no age statement. Though we will likely have a resurgence (and, I hope, a glut) of older rye offerings once the current stocks mature, for now the pickings are slim. However, there remains a great, white, northern hope: Canada.

But this has an image of Thomas Jefferson on  it and is produced by a Kentucky company. Read the fine print: IMPORTED BY CASTLE BRANDS, PRODUCED IN CANADA.

Now wait. I know what you are thinking. Canadian "rye" sucks. Mostly you are correct. This is for a number of reasons:

Pretty dismal. And it's mostly our fault. For years the major market for this stuff was south of the border where palates asked for "smooth" and easy to drink spirits that were usually mixed with soft drinks. But we don't judge American whiskey on blended crap, nor do we dismiss all of Scotch after trying some Johnny Walker Red. What would it taste like to try the unadulterated "flavoring whiskey," maybe at a respectable proof? Apparently, Wiser's, Alberta Premium and Forty Creek are putting forth fine efforts in this area, though only the latter is officially available in the US (again at 80 proof). But oddly enough, hope is not lost, as a number of American bottlers have released Canadian rye, though it is not always easy to tell where the juice is coming from. The best hint is the small number of 100% rye whiskeys currently on the market. Other than microdistillers (including the excellent Old Potrero), this stuff is all Canadian. They include:

All of these likely come from Alberta Distillers, though none of them disclose the actual source. Alberta is said to be the only possible source for 10 year-old 100% rye. The Pendleton is the odd man out as it is older, lower proof and is not labeled as "straight" rye, which gives me concerns about used cooperage or perhaps the addition of flavorings or grain whiskey (which are legal in Canada), so we will defer discussion for now.

Of the "straight" offerings, I have had the WP in a bar and am about to review the Jefferson's. As these likely all come from the same place, the Masterson's, at the lower proof and equal price to WP, is a bit of a hard sell unless there is some interesting barrel selection going on. Will still have to try it at some point.

Nose: Warm rye bread, vanilla custard, apples/cider, small amounts of alcohol/volatile chemicals, fresh grain and leather. This is really a lovely nose. Reminiscent of the Saz 18, or what I think it might smell like at this age. Combines the young, bright rye notes of the popular LDI ryes, with the older, darker flavored aged ryes I'm always going on about, though the latter are subtle.

Palate: Very spicy attack with well-controlled alcohol and a candied ginger note. Baking spices, vanilla and caramel follow, along with rye bread and leathery notes. Also a hint of butter. Sweetness is more in line with a bourbon (higher) than most ryes. Weight is medium and overall this gives the (pleasant) impression of chasing candied ginger with cinnamon toast made with rye bread.

Finish: Largely echoes the palate with warming burn then a clean and cool sensation. The ginger and spice linger a bit, as does the sweetness.

Well. We definitely have a winner here. It is not nearly as far evolved in its aging process as the prestige 18+ ryes out there, but this whiskey has many similar qualities, and combines them with the pleasant characteristics of more youthful ryes in a very successful way. In truth, I'm not sure I would have guessed that this was even 10 years old, though, and I assume the climate in Alberta is a good reason for that.

In any case, I find this a good deal more interesting than the Whistlepig (which was sweeter and higher proof, but more one dimensional; still a fine desert whiskey), and at $33 this is just an insanely good deal for rye whiskey. I'm going to bunker a few more of these guys and laugh every time someone brags about their $100 rye "from Vermont."