Wild Turkey: Then and Now 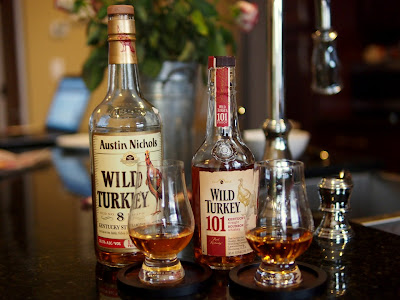 Introduction
This bottle of Wild Turkey Old #8, 101 proof was my first successful dusty find. Squirreled away in a terrible shop in Gloucester, NJ, and protected by an almost insurmountable wall of cat urine odor, I was inordinately pleased to find this. I have been hoping for some time to find some 8 or 12 year old Turkey, but this is a fine start. I've been carefully having a sip now and then and marveling over how good it is. "They don't make it like this anymore." But I guess that's more of a testable hypothesis than a statement of opinion, really.

Old #8 was a short-lived product put out as a transition from the 8 year-old 101 proof that had been their longtime stalwart. Like George Dickel and others, a change from 8 years old to #8 brand still left a prominent "8" on the bottle for an unwary consumer. The initial few years of the Old #8 in the early nineties (our special occasion bourbon in college) were considered great and largely equivalent to the 8yo. Turkey afficionados (I'm more of an admirer), would say the #8 went downhill until the late 1990s, when they dropped the age statement and that it has gone downhill since then: The age has been dropping, they've put out lower proof versions and their entry proof has gone up (lower entry proofs typically extract more flavor, but use more barrels per bottle of whiskey). That said, my casual encounters (Southwest flights, neighborhood bars) over the years have remained positive, so maybe it is memory that is faulty.

Methods
Two identical Glencairn glasses were filled with 30g of bourbon (WT#8, WT101) each, after being first rinsed with water and then rinsed with a small amount of the respective bourbon to eliminate any contaminants or effects of the water rinse. The glasses were then placed on identical coasters, one of which had been marked (the WT101). The glasses were then randomized and presented to me for tasting. I tasted them sequentially, eating a wheat cracker and taking 4oz filtered water before each. Drams were tasted against a black countertop to prevent differences in color from unblinding. Most of each sample was taken orally and then expectorated to avoid accidental intoxication from impacting the results.

Results
Bourbon 1 Tasting
The nose is revealing of sawn and toasted wood notes, along with a hint of ground coffee. Caramel, vanilla bean and waxy notes follow with some swirling, as I find typical of WT product. Really a perfect dessert bourbon nose. The palate is middle weight with very prominent rye spices, and a good level of sweetness that is balanced by char and tannins. The wax is back here as well, along with smoke and incense, giving a slightly Novena-like flavor. The alcohol is well tamed for 101 proof. The finish is medium to quick in length, pleasantly warm and slightly bitter at the end. This is very good and very typical high-rye bourbon, though not particularly exceptional.

Bourbon 2 Tasting
The nose is similar to Bourbon 1, with the addition of more acetone/organic notes, making me think the cut was wider on this. Also more vanilla and cognac-like notes. The palate is heaver, with spice, chocolate, coffee, toffee, butter and dark tannic wood flavors. Syrupy, but the sweetness is again well balanced with acid and tannin. The alcohol is more evident here. The finish is very long, drying and warming, reminiscent of a much older spirit than either of these is. This is all Bourbon 1 is, but better. To borrow a term from the brits, this is very moreish. Clearly, I think this is the Old #8.

Unblinding
I was totally wrong. I liked the second one better. The more prominent alcohol and slightly more muted spice character are the only departments in which the new version fell short.


Conclusion
I'm a little disappointed to have been wrong, but since I've not had the current 101 in a long time, I'm not too concerned about my tasting acumen. However, this is the best possible outcome. I like this better than the dusty and better than the Rare Breed I had a few months back. More importantly, I never have to go back to cat-pee-store again! Maybe the #8 was from the tail end when it was nto so good, but in any case, I shall drink more turkey in the future. Aside from the comparison, they were both very good; my bottle of 101 bordered on excellent. I'm interested to try the RR single barrel, but this, at only $23, is pretty compelling stuff.

Posted by Ryan Connolly at 8:38 PM