Actually, now that I think of it, that title is terribly open to misinterpretation.

Thomas H. Handy is a young, barrel-proof straight rye whiskey and part of the well-regarded Buffalo Trace Antique Collection. Despite its incredible ratings, it has attained the status of a red-headed stepchild in the BTAC, often lingering on shelves far longer than its mates. I am, however, a great fan of the THH, and if there is a better base for Manhattans to take on the train to Atlantic City for a bachelor party, I've not heard of it.

Sadly, I find myself in between bottles of THH. This is bothering me inordinately, as I have all the other BTACs and I tend toward completeism. However, there is none in my house, there is none within walking distance, and my wife has the car today. So, I bring you instead, the Willett Family Estate Bottled Single Barrel Rye: 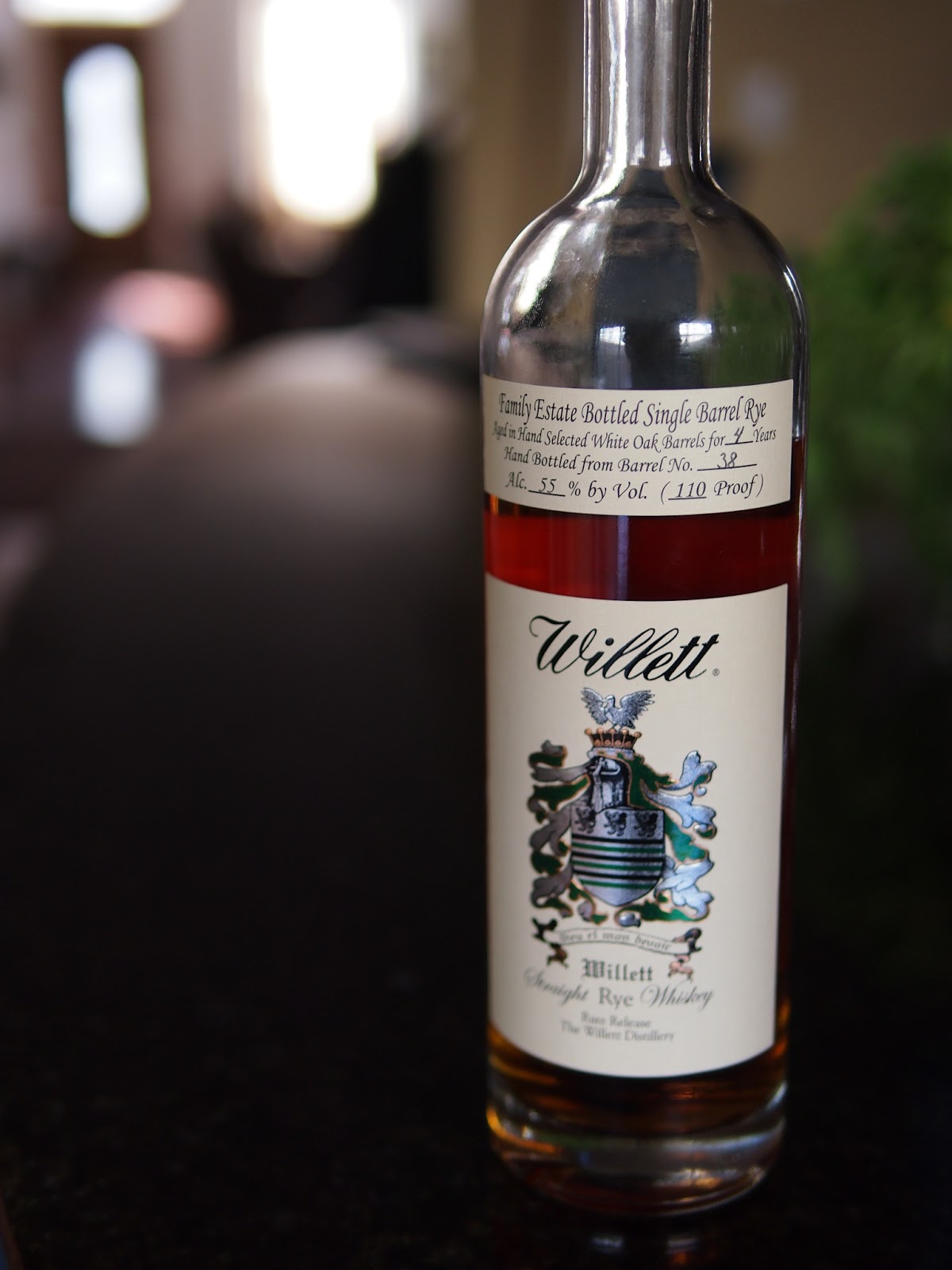 This one is from KBD, run by the Kulsveen/Willett family. This is a straight rye whiskey, which by law must be at least 51% rye and aged in new, charred oak barrels for at least 2 years (among other regulations). From their single barrel series, this Willett clocks in at a very respectable 110 proof at 4 years old and was bought for $33. So far, so good: a young, high-proof rye for half the list price of the Handy.

The liquid itself was "distilled in Indiana," per the label, which means it was almost certainly produced by the romantically named MGP Ingredients (formerly LDI). The "LDI rye," as it is still colloquially known, has a  95% rye and 5% malted barley mashbill. In this case, the malt is included to take advantage of enzymes that reduce starches and complex sugars in the grains to the simple sugars that yeasts ferment into alcohol. Rye itself can be "malted," (malting is just the germination of the seeds that comprise a grain) but barley is typically used as as it is easier for distillers to handle (less sticky, bubbly etc).

At present, there are a number of products that use the LDI rye, here is how they look on paper:

Hmm. I started this table assuming that I would say that the Willett has the best price/proof ratio, but it seems that Redemption wins; I may have to try it. That said, I still like the high proof of the Willett, as, like most Americans, I have access to clean water and can do my own dilution. The high proof also allows the whiskey to shine in cocktails, even when you are not trying to forget you are going to Atlantic City.

Unlike the older, hard-to-find and very expensive ryes I have thus far been posting about, the young LDI is everywhere. I am very interested to see what these will be like at an older age, but what if we're thirsty now?

The nose on this one initially presents with candied and also pickled ginger. Further swirling reveals mostly alcohol but also some pleasantly high-toned floral notes along with an undercurrent of spice. Neat, the palate is quite hot, rather sweet and spicy; it is too hot to really get any more specific. The finish is quick and minty/herbal. Adding a bit of water to this helps on the palate, though the nose becomes more muted. With water, some vanilla and caramel flavors emerge after the initial alcohol attack, complementing the spice and sweetness.

This should be better than it is. However, it is not incredibly pleasant to drink neat or diluted. It is too spirity and young, and has too little density of flavor, as has been my experience with the other LDI rye I have had, Bullleit. When I compare it in my mind to the "baby" Sazerac or THH, I find that the latter two are rounder with deeper and more well-developed flavors. This may be due to mashbill, as the Handy's is much closer to the minimum 51% rye, and so has more bourbon-like flavors, which I tend to prefer at this age.

So, this will be used in cocktails, as I'm sure the overwhelming majority of young rye is. Will have to do some comparisons of young ryes (maybe Knob Creek, Willett and Sazerac) in Manhattans or Old Fashioneds. Since it is too early for cocktails, however, we will have to save that for another time and admit that thought the Willett looks great on paper, it is unfortunately no man's Handy.

Posted by Ryan Connolly at 3:41 PM