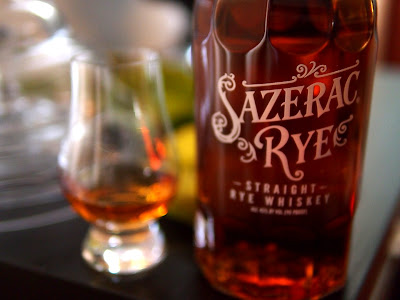 To wrap up this streak of rye-focused reviews, today we have, from the Sazerac Company,  their eponymous rye whiskey. Distilled at Buffalo Trace and handsomely bottled at 90 proof, "Baby Saz" runs around $30.

The name Sazerac comes intially from a brand of cognac, Sazerac-de-Forge & Fils, imported to New Orleans in the 19th century and used in what was called the Sazerac Cocktail in the Merchants Exchange Coffee House. Orginally owned by Sewell T. Taylor (the importer of the cognac), the coffee house was sold to Aaron Bird, who renamed it the Sazerac House. It passed again to Thomas H. Handy around 1870, who apparently first recorded the recipe for the cocktail, which may have been invented at the House, or by Antoine Peychaud, of bitters fame. The purchase of this business by Handy also marks the founding of the Sazerac Company.

But wait, cognac!? Indeed. Whiskey in America, and for that matter the UK, had been a second choice to brandy for many years until the late 19th century. In 1863, a North American louse, phylloxera, decimated the vineyards of Europe, leading consumers to look beyond the grape for drinking ingredients. A small step for lice, a giant leap for whisky-kind.

So, we have the Saz. This one is, by all accounts, a diluted version of BTAC THH, thus made from the BT rye mashbill of 51% rye, 39% corn and 10% malted barley. This mashbill is similar most American ryes other than LDI. Current Sazerac 18 is different and, as mentioned in the ryeday post, was produced elsewhere. If you calculate proof/$, Baby Saz comes to 3 proof/$, while THH comes to roughly 1.8. So in this sense the Baby is a much better deal, but again part of the beauty of the THH is its barrel-proofness.

In the glass it is a darker and redder whiskey than most bourbons of this age. The nose is pleasantly lifted with a hint of acetone that carries along with it cloves, cinnamon, anise and warm rye bread. There are also some fainter dulce de leche and corn notes if you really get your nose in there. The palate is warm, rather than hot, and almost completely dry. The spices from the nose return, along with peppermint, ginger and vanilla caramel. The finish is quick and leaves a faint apple flavor along with a clean and cooling feeling I associate with good distillation (few tails).

Overall, I like this a lot. It is totally obvious that this is THH + H20, and that is a very good thing for$30. It certainly lacks the pleasantly punishing 130 proof concentration of flavor and alcohol of the Handy, but sometimes I want a whiskey that doesn't require the use of a "safe word." It is in many ways similar to the Knob Creek Rye, minus the love-it-or-hate-it Beam yeast, but drier, spicier and a bit more typical. This is far better sipping than the Willett, for my taste, but this stuff is so spectacular in cocktails that that's where most of it will end up.

So. We have finished the current round of American ryes. Not completely comprehensive, but I'm satisfied for now, with the exception of Russell's Rye (which I'd like to try) and some of the cheaper guys that may yet end up in a bottom shelf tournament (and before you ask, Whistlepig, Jefferson's, and Pendleton are actually Canadian). My final thoughts:

The Willett single barrel gets a lot of love, as do the Dickel, Templeton, Redemption,  Bulleit, James Pepper and other near-identical LDI ryes. I can say that the Willet was not to my taste on its own, though I would like to try an older barrel before passing judgement. Also, I suspect that I am unusually averse to the Lawrenceburg juice, as I seem to be in a minority here, so I will recommend you try some yourself; it's everywhere lately.

These are moderately priced and very well made. I think I tend to like the Knob on its own, where it reminds me of a pleasantly high-rye bourbon. I think it is a bit too bourbony to stand out as a rye in cocktails, however. Just as good on its own, the Saz additionally makes some of the best Manhattans, Old Fashioneds and, yes, Sazeracs that I've had. It is a perfect cocktail rye.
These are all perfect or near-perfect ryes. They are expensive and hard to find. In the words of Ferris Bueller, if you have the means, I highly recommend picking one up.


Next up: Children of the Wheat