The undiscussed rye from Ryeday (see previous post) is perhaps the most enigmatic and opaque. Michter's is the name of a closed distillery that operated (first as Bomberger’s) near Shaefferstown, Pennsylvania until it closed in 1989 after filing for bankruptcy. This distillery was well regarded in the northeast as a producer of a sour-mash Jack Daniel’s alternative and is now most famous for having produced the excellent Hirsch 16, possibly the best bourbon I have ever tried, recently made even more famous in Chuck Cowdery's book, The Best Bourbon You’ll Never Taste. (Contrary to the title, I got lucky at a restaurant in Princeton). As you will note, this last was bottled by Hirsch, not Michters, and here is where things get even stranger.

The current "Michter's" is a brand owned by Chatham imports of New York, who do not distill. Their whiskey is either sourced from other distillers or made by them under contract. More complicated still is the fact that Chatham is rumored to have sourced the Michter's 10 year rye whiskey from Kentucky Bourbon Distillers (KBD), who themselves did not distill it, but rather souced it from someone else. This may have been the Cream of Kentucky rye that also goes into Saz 18, or it may have been more of the Medley rye that goes into the Hirsch 13,21,22 etc.
The Michter's 10, in particular, has the warm and rounded spice notes of the other, older medley ryes, and shares some of the maple syrup nose in the empty glass, but there is perhaps less up-front oak. There are definite notes of fig jam, apple and rye bread on the nose.  There is, in the mid palate, a very similar profile to the VWFRR (I actually mixed up my glasses at one point the other night). If there is a difference in the palate, there again may be slightly less wood, a touch more bitterness and a touch of peanut that led my friend to suggest there could be Beam product present (I'm not so sure about the latter, but would be very happy indeed to learn of an as-yet unintroduced aged beam rye). Similar to the Sazerac, there is a candied quality and lighter body overall when compared to the Medley ryes.  The finish also shares more with the younger-tasting Sazerac, with a candied sweetness and minty sensation on a moderate length finish, compared to the 15 minutes of maple syrup after a sip of Hirsch 22.

Whatever the provenance, this rye is certainly of a class and character with the Van Winkle, Black Maple Hill and Hirsch ryes. Really, if presented the option I would buy whatever can be found most cheaply. The only older rye that is head and shoulders above this is the Hirsch 13. The Hirsch 22 and BMH23 are by far the smoothest and almost liqueur-like, though whether that is a good thing may be a matter of taste.

This guy is usually about the same price at this point as the VWFRR, but (in most markets) easier to find. Many may object to the opacity of non-distiller producers like "Michter's," but once in the glass I find no problem with this stuff at all. I already have more bourbon and rye in the man-room than my wife finds healthy or sane, but I think I will be adding at least one more of these.

And to continue the OCD, the current, update on our thoughts about the Rye Venn Diagram: 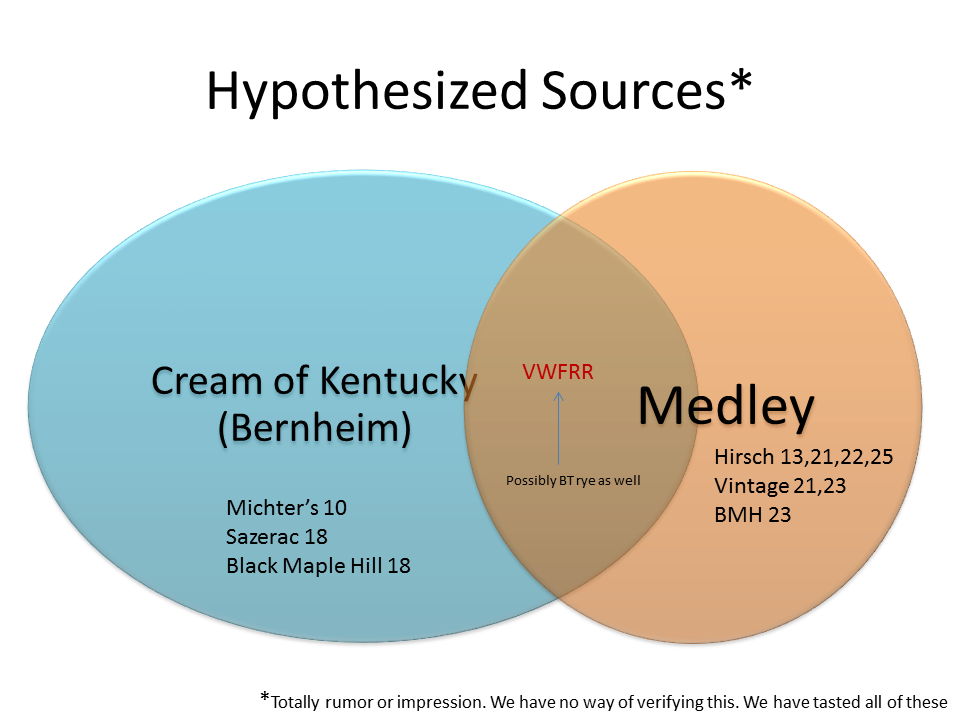 Posted by Ryan Connolly at 2:58 PM