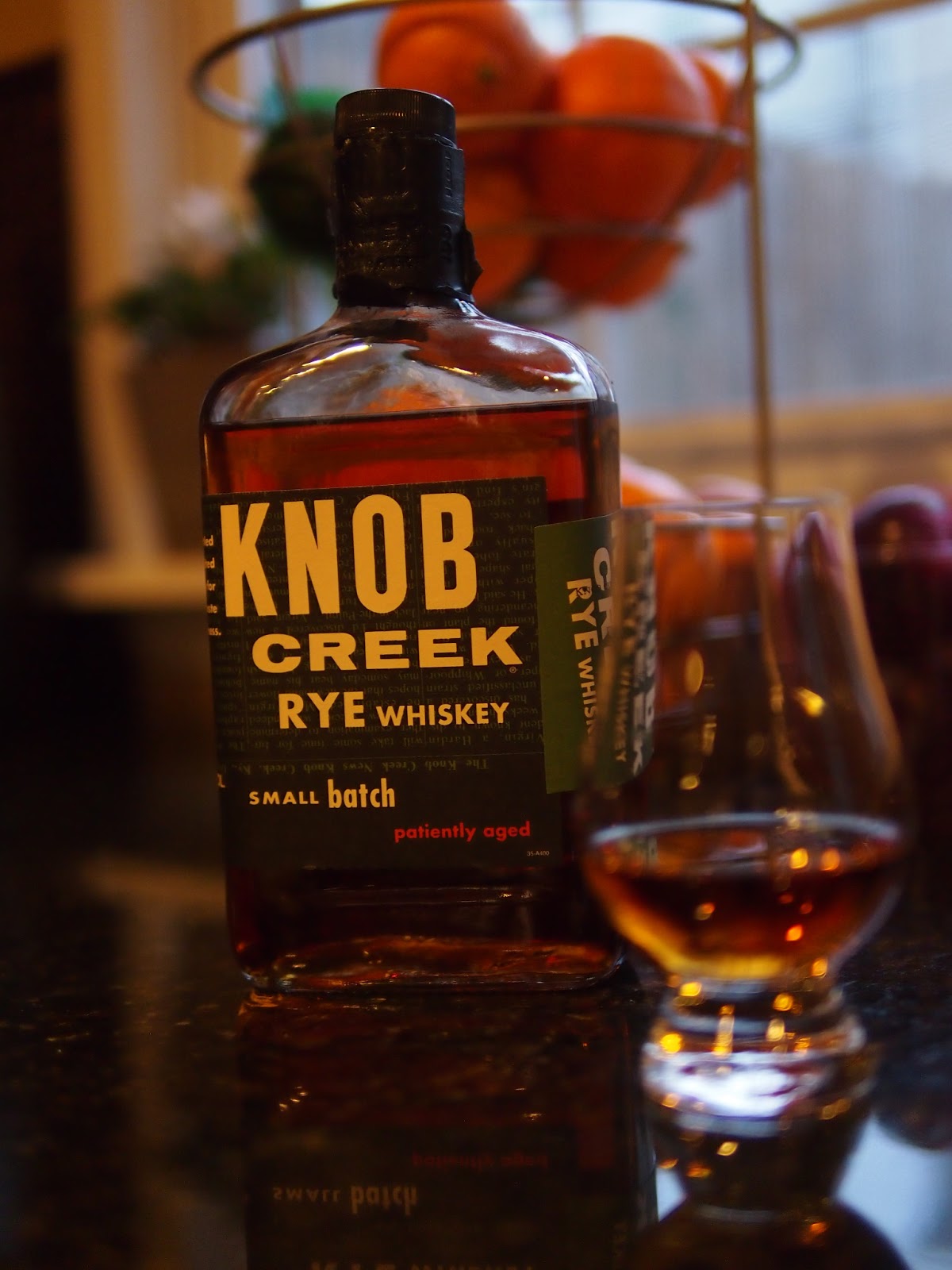 Continuing the rye theme is this guy, who was on sale at the state store on the walk home from work. Knob Creek Rye is a 100 proof offering distilled at Jim Beam, carrying no age statement. Beam Global is the subject of lots of complaining over the past few days about the decision to decrease the proof of Maker's Mark (who they recently acquired) from 90 to 84. I never drink it anyway, so I don't really care. This will be the Jack Daniel's story all over again, and I expect that, like JD, MM will have no problem selling whiskey to brand loyalists (as opposed to enthusiasts). Every Weller product is a superior wheater in my opinion  as is Larceny from Heaven Hill.

Anyway, this post is about KCR. As opposed to Knob Creek bourbon (which is around 75% corn, 15 % rye, a mashbill shared with Jim Beam, Booker's, and Baker's), this stuff is at least 51% rye (by law as discussed in my previous post). This is reportedly the same mashbill as Jim Beam Rye, the ill-fated Ri(1) and the stalwart Old Overholt, which just lost its age statement (it was 4 years). There must be significant barrel selection and/or age differences at play: I can't get anywhere near Beam Rye, but I still have a fondness for the OO in an old-fashioned. I've not had the new, younger stuff, but the OO I'm used to seems more tannic and older than the Beam Rye. I had Ri(1) a long time ago and ended up giving it away.

This, however, is a different story. I don't know that I would have blindly identified it as a rye, rather than a high-rye bourbon. This makes me think that it is somewhere near the 51% minimum rye in the mash. When first opened, it begins with a nose very similar to  Knob Creek bourbon, Booker's and Baker's, essentially betraying the Beam yeast, though in this application it is not at all unpleasant. As the glass airs out, candied ginger, honeysuckle and spices come through, suggesting a rye after all. The nose is actually, once the yeast blows off, surprisingly similar to Sazerac 18. On the palate it is very round, especially in comparison to the unpleasant sharpness I find in LDI ryes. The palate shows corny sweetness, but this is balanced by firm rye spices that keep it from being a round, sweet mess. In this respect it is far more balanced that the KC bourbon (which tends toward to rounds, sweet mess end). It tastes certainly older than the Willett, maybe 7 years? The finish is very pleasantly drying and brings back the candied ginger again.

Not content to leave things alone, I hoped to create a vatting of 50:50 KCR and Willett Rye, hoping for a 75% rye to combine the best of both whiskeys. The thought was to combine the roundness and depth of the Knob with the more characteristic rye notes of the Willett. Unfortunately, I ended up with a nose full of Beam yeast and a hot palate full of grass... It was worth a try.

Overall, this is a very pleasant drink and is leading my list of inexpensive rye whiskeys. It is certainly more of a bourbon-drinker's rye, as the corn content seems rather high, but if you like bourbon, I think this is as fantastic as it is easy to find (around me it's everywhere). In some ways it tastes like what I wanted Basil Hayden's to be, an upgraded Old Grand-Dad (high-rye Beaminess but with more polish, rather than just more water).This one, unlike the Willett, will be drunk neat.

In coming posts, I hope to wrap up my current streak of rye whiskey with a review of Sazerac 6 (in the mail), maybe an investigation of the effects of air on high-end rye, and hopefully a visit to the nearby Mountain Laurel Distillery, maker's of Dad's Hat Rye. I'm also happy to take suggestions in the comments below.

Posted by Ryan Connolly at 9:21 AM