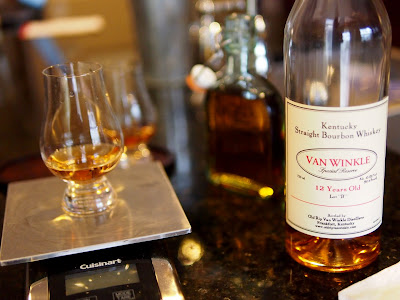 Most of what is written about whiskey and exposure to oxygen revolves around the rate at which it spoils when exposed to air. "Finish off the bottle quickly once it's below 1/4 full," we are told, because it goes downhill fast from there.

In my experience, this has certainly been true of peated scotch, which makes sense as peat phenols are "antioxidants;" the phenols more readily react with oxygen, sparing the rest of the compounds in the whiskey at their own expense. Over time exposed to air (and indeed even exposed to air in the maturing cask), peat flavors diminish. I have also found a reduction in complexity in older American whiskeys, like George T. Stagg and some older ryes. Here, I think it likely that many of the volatile compounds that contribute to pleasant aroma on first opening simply evaporate away with repeated air exposure.

However, I have not found the evolution of bourbons when exposed to oxygen to be universally negative. In particular, I have found that wheated bourbons tend to improve over time. When first opened, I have tended to find Weller 12, a previous Van Winkle Lot B and ORVW to be pleasant, but a bit simple. As the bottle journeys toward empty (usually in my case over several months) I find that I enjoy it more and more. I have even gone so far as to split new bottles of wheater into two 750ml bottles to accelerate the process. I can't help but think that this is due to oxidation reactions, but it could be many other factors (my palate, light, phases of the moon etc.)

To be empirical, I planned ahead this time. When I opened  my latest Lot B (AKA Van Winkle Special Reserve 12 year-old bourbon), I immediately stored 200ml in a sealed bottle with almost no airspace and happily drank the remainder for a little over 2 months until there was only about 200ml left. I then sadly put both bottles away in dark cupboard until today. They have been in the same environment with respect to temperature, light, humidity, etc. In order to be as circumspect as possible, I will be tasting these blind. I have poured 20g of bourbon each into identical Glencairn glasses, randomized after being placed on identical coasters, marked on the bottom. I will be tasting them sequentially, cleansing the palate with filtered water and 2 wheat crackers before each dram. No difference in color was noted, so no precautions against unblinding by color were taken.

Nose is medium intensity: Faint citrus and stronger wood and caramel and vanilla notes, along with dulce de leche and acetone/aldehydes, also a fainter nutty note and hint of pine. Pleasant, but not aggressive. The palate is unmistakably "wheater", with caramel, citrus, milk chocolate, integrated oak and very well-tamed alcohol. There is a slight bitterness here that distracts. The end-palate and finish start with a pleasant baked-goods flavor (almond croissants, white bread); this trails on for about a minute leaving a very faint herbal note along with a small amount, again, of bitterness.

Overall, this is pleasant, but I would not $60 for it again, nor do I even prefer it to Weller 12.

The nose here is more intense, with more prominent caramel and vanilla; these seem "sweeter" and more in balance with the acetone. I prefer this nose: it is a preview of the PVW 15 nose, in many respects. The palate is again sweeter with apparently bigger body and less burn. I'm here getting less complexity, but it is more pleasant. Mainly primary wheat/caramel/vanilla notes, but none of the previous bitterness. The finish is without burn and otherwise very similar.

I prefer Glass 2. It is a bit more "primary," but the complexity of Glass one was due partially to flavors I found unpleasant. Mainly, glass 1 was bitter, and glass 2 was not. The nose on Glass 2 was also notably more intense. Even after letting them both sit out for 15 minutes, the findings are the same. The differences are not night-and-day, but they are significant. I still don't think Glass 2 is worth $60, but it is closer. I prefer ORVW 10/107 and Weller 12 to both glasses.

So, which was which? Glass 2 was without air! Hm. I expected differently. Perhaps I have been mistaking complexity for pleasure, or maybe it is mood-dependent, but in any case I today prefer the fresh Lot B. I guess its time to finish these off!

Next: Wheaters Part 3: Battle of the 12 year-olds (Weller, Van Winkle, and Old Fitz)
Posted by Ryan Connolly at 4:46 PM